Professionals within the AEC industry (architecture, engineering, and construction) are accustomed to using high-powered workstations that can handle graphics-intensive workloads. When designing and rendering residential and commercial projects, AEC professionals use numerous 3D applications, such as Autodesk Revit and AutoCAD.

But the way AEC businesses work has changed over the past few years, accelerated by the pandemic and further fueled by the flexibility that hybrid work provides for both workers and their companies. Architects, engineers and designers who were working in the office five days a week are likely to be working from home a few days of the week now, as well as working out of clients’ offices or on-site, in some cases. How can professionals within the AEC field continue to perform optimally while working away from their high-powered workstations?

Our first two posts on our three-part series outlined AEC security in remote and hybrid working models and collaboration needs for AEC hybrid teams. In this final post of the series, we share real-world examples of AEC hybrid compute and collaboration from the webinar entitled Drive the Agility and Productivity of your Architecture Business in the Age of Hybrid Work. In the webinar, Ken Hauck, Industry Strategy, AEC and Manufacturing at HP Teradici, and Stephen Moore, HP Teradici Technical Alliance Architect, demonstrated how architects and engineers can use remote display and collaboration solution HP Anyware, (previously Teradici CAS), which is based on PC-over-IP® technology, to complete projects in a remote or hybrid work environment. 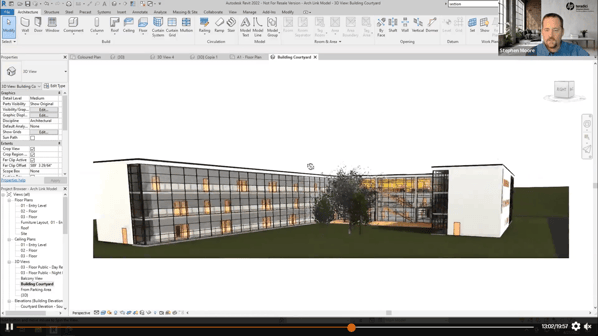 Sharing the example of CLK Architects, Ken Hauck gave some background to the firm: “The small architectural firm based in Texas needed to enable their employees to work from home with 3D applications.” The company also had the additional need to maintain their confidential intellectual property (IP) and be cost-efficient.

While CLK Architects used powerful workstations at the office that ran 3D architectural applications, remote workers were using a remote display solution that was delivering low performance when accessing their workstations. Additionally, the software didn’t support multiple monitors. As a result, architects weren’t getting the responsiveness they would have in the office. When remoting-in from home, the display was shaky and had poor resolution leading to frustration for architects who felt unable to work effectively.

It was only when CLK architects changed their remote display software to HP Anyware that they were able to improve their workflow and productivity. As Hauck explained, “upgrading their software to a better solution enabled a good experience with very strong interactive performance, high resolution and multi-monitor capabilities.” Company data was kept secure because it was hosted in the data center at the office and was only transmitted as fully encrypted image pixels to the client device.

With the new solution in place, CLK were able to implement remote displays in both their office and in employee’s homes. You can read more about the CLK Architects customer story here.

Collaborating as a hybrid AEC team

There is a great deal of flexibility required in the way AEC businesses work right now. Architects and clients aren’t just working in offices and at home in the same city. Many are working from other states, or even countries. Yet, they still need to collaborate to complete projects on time, no matter where they are working from.

AEC companies don’t want to have a complicated IT setup as they want to ensure that employees and customers have a positive application experience when collaborating over varying internet connections. At the same time, keeping IT costs down and company data secure during these sessions is a high priority.

With HP Anyware, AEC firms can access host systems from any client device with a network connection, while achieving a level of visual performance that rivals a physical workstation. Employees can access information stored on a data center from any type of endpoint, no matter where they are as long as they have network connectivity.

Since employees are no longer tied to a physical space in the office, they can do the same work from home, at their own pace, and work either asymmetrically with their colleagues or in real-time. Collaboration can happen from wherever employees are, all without losing visual performance or compromising data security.

Hauck described the benefits to architectural firms: “This enables a whole new model of hybrid work with multiple work locations, which can be just as effective when away from the office as sitting in the office was previously, and at the same time you can manage and secure data and intellectual property.”

Stephen Moore demonstrated how to use HP Anyware to access a system that was a thousand miles away from him. The architectural project was on Revit and the moment Moore connected to Anyware, he was asked to login with his security credentials. Only then could he access the host system, which opened up Revit as he had last left it.

Achieving the same performance as a local machine, Moore was able to work on 3D vector graphics live for both a small project and a larger commercial project. Zooming, panning, and rotating on Revit without any distortion, Moore also demonstrated the crispness of the PCoIP remote display protocol when interacting with 3D visuals in the AEC industry, such as adding doors, windows, roofs and walls to a design or conducting a walkthrough.

HP Anyware is designed for color-accuracy, text clarity, and interactive responsiveness, and the solution builds to lossless, so the moment you stop interacting with the image, it displays the exact image as it appears on the host workstation. Your AEC data remains secure in the data center since only image pixels are transmitted to client endpoints.

No matter where you are or what device you use, with HP Anyware and a network connection, you can access your company data and applications securely and easily.

Watch a demonstration of architectural modelling and see HP Anyware in action in the webinar on architectural productivity in hybrid work environments, now available on demand.