If you’ve been paying attention to the latest developments of the Teradici PCoIP protocol, you’ve likely noticed a few mentions of NVIDIA, starting back in March with our support for NVIDIA Quadro vDWS for RTX Server, announced at the GPU Technology Conference. This was formally rolled out with the announcement of our PCoIP Ultra enhancements and was released in technical preview in April.

We’re pleased to announce that Teradici support for NVIDIA NVENC will be generally available with the 2019.08 release of Cloud Access Software in August. This feature of PCoIP Ultra enables NVIDIA RTX servers to deliver highly interactive graphics to remote users without compromise. Leveraging NVIDIA NVENC encoding technology with security and performance benefits of the Teradici PCoIP protocol, graphic designers, artists, and CAD/CAM users can work productively over virtually any network.

Teradici has a long history of collaboration with NVIDIA and support for NVIDIA GPUs has been an important part of our success with teams using virtual workstations for detailed graphics, visual effects, and video production workflows, whether in on-premises data centers or using public, private, or hybrid clouds. With the latest addition of NVENC support, our list of supported NVIDIA GPUs has also expanded, and now includes Turing-based RTX 6000 and RTX 8000 in addition to the previously supported P4, P100 and M60. Some of our customers have also tried the Tesla P40 and T4 GPUs with success.  (For a full list of supported NVIDIA GPUs, see our Cloud Access Software Administrator Guide for Windows and Linux.) 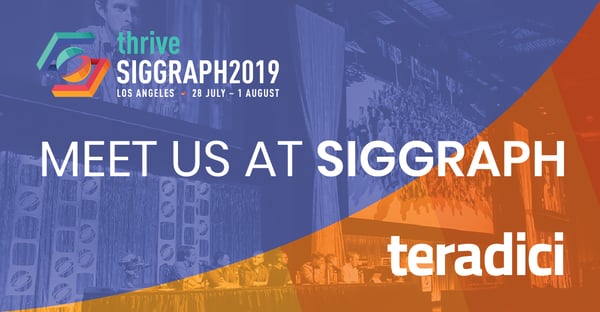 Teradici is collaborating with NVIDIA and Microsoft at SIGGRAPH to demonstrate the new capabilities of PCoIP Ultra with the NVIDIA RTX Server and with the new NVv3 GPU Series virtual machines on Microsoft Azure. Azure NV‐series VMs have been architected to support powerful remote visualization workloads and other graphics‐intensive applications, backed by the NVIDIA Tesla M60 GPU. NVv3 VMs have large memory, support for premium disks, and have hyper‐threading enabled to offer double the number of vCPUs compared to previous generation of NV series VMs.

Meet us at SIGGRAPH and get a free pass with code MICROSOFT19 or check out some of the other events we’ll be at in the next few months: teradici.com/events. To schedule a meeting with us at SIGGRAPH, email events@teradici.com.

About Us
Resources
Careers
Management Team
Board of Directors
Investors